After over 30 years living on and off in Marbella, I have seen pretty much every type of restaurant come and go.

I’ve eaten at the good, the bad and the very, very ugly (including one where the food was so bad that I considered ordering a take away pizza to be delivered to my table). I was beginning to worry that my palate might be getting jaded; that no new restaurant could excite me. 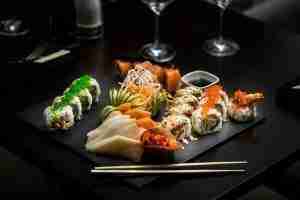 This was before I tried Noche in Puerto Banus, a restaurant and bar offering innovative international and Asian fusion cuisine. Normally when I review restaurants, I give my opinion at the end, but I’ll break the habit of a lifetime on this one. Noche is already my restaurant of the year.
Noche is the brainchild of owners Karl and Gaby who bring yeats of luxury hospitality expereince in Dubai, LA, Rio and the Far East with them “We wanted to do something different at Noche” the friendly couple explained
First impressions matter and the design of Noche is sensational – from the terrace to the main bar area, raised banquette seats and a more intimate dining area, ll are divided into different zones. Karl and Gabi worked closely with Justin Marston and the Continental Design team and Noche has a definite urban feeling to it. 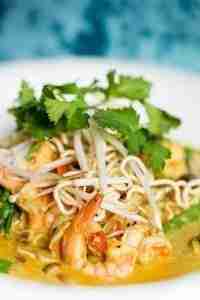 Karl and Gabi are also quick to point out that the menu has not been created with only British tastes in mind. It reflects the multinational melting pot that is Marbella (Karl is British while Gabi is from Rio) and as the beautiful Brazilian herself says “When you eat at Noche you travel from East to West”.

They have also kept the prices reasonable, with a glass of Vueve Cliquot at€14. “I wanted to go for quality” Karl explained “and I also wanted to have wines in Noche that I would drink – which was fun choosing!”

We sat at one of the banquette tables – which are going to be hugely popular – and scanned the menu. Now I know that the cynics out there will be thinking “They are getting a review meal so they are bound to say it’s good”, but the menu really did look sensational. Starters included the Mixed Vegetable and Rock Shrimp Tempura with Miso Dressing, or Tentsuyu sauce and Chilli Mayonnaise, and the Trio of Poppers (Salt and Pepper Szeuchan Calamari, Korean Fried Popcorn Chicken and Jalapeno Peppers with Ginger Romesco Sauce, Nam Jim Dressing and Guacamole).

We started with theMaki and Sashimi Mixed Platter that was beautifully presented and had several of us guilty of the cardinal sin of reaching for our smartphones and posting pictures on Social Media straight away! It looked as good as it tasted. (And a friend in LA immediately replied “I want!”.

And now a spoiler alert. If the starters were good, the mains were even better! Miso Glazed Salmon with Rice Noodles, Black Garlic Dashi and Tenderstem Broccoli had a delicate, sublime taste while the Noche Sliders (3 mini burgers Beef Burger glazed with Teriyaki Sauce and Shitaki Mushrooms on Soft Brioche, Shredded Duck, Chilli Aioli and Slaw on Soft Brioche, Soft Shell Crab, Avocado and Kimchi Aioli on Soft Brioche served with Truffle and Parmesan Fries) started a friendly arguement about who was having which slider. (A rather brilliant soft shell crab for me)
The Thai Prawn Coconut Yellow Curry with Noodles and Straw Mushrooms was yet another stand out dish, with a sauce that softly crept up on you rather that launching a full frontal, no holds barred assault on your palate. Even out self proclaimed curry afficianado photographer was impressed.
Karl was all smiles as the next main arrived. The 24 Hour Slow Cooked Short Rib, Sweet Potato and Jalapeño Pure, and Green Shallot is Noche’s signature dish. Karl first tried this in Hong Kong ”I was mesmerised by it” he said. So were we  and, for the first time in a very long time we all fell silent as we took in the beautiful textures and deep flavours of this truly magnificent dish.

The outstanding food continued with dessert. Sometimes the final course can seem like an after thought but not at Noche. We sampled the Carmamon Brulee with Shortbread Fingers, Orange and Almond Cake, Spiced Syrup, Whipped Mascarpone and the Chocolate Delice, Vanilla Ice Cream and Pistachio Crunch. I was blown away by the wonderful Coconut Panacotta, Mango Sorbet, Fresh Chilli Caramel that I shared with Gabi, a dessert that again rendered me speechless.

Noche is without doubt one of the most outstanding dining experiences that I’ve had in Marbella for a very long time. Karl, Gabi and the rest of the team have set the bar so high that the rest may have to invest in pole vault lessons to compete.

UK GOVERNMENT WRITES TO MORE THAN 100,000 BRITS LIVING IN SPAIN

Gastronomy and Golf on La Concha!