Marbella showed its opposition to the planned return of bullfighting in a peaceful and well ordered protest yesterday. 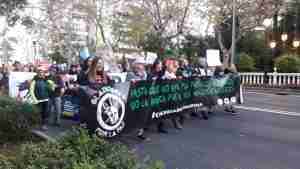 Over 700 people took part in the march, that started at Marbella’s Plaza del Toros and ended with speeches at the Plaza del Mar.

The current PP-OSP administration plans to reintroduce bullfighting as part of the refurbishment of the ageing bullring, despite a marked decrease in attendance, bans elsewhere in Spain and an outcry from the public. 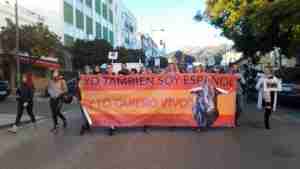 Organised by the “Gladiators for Peace” group, politicians including Miguel Díaz and Victoria Morales (IU) and Lolo González and Victoria Mendiola (Podemos), were present, though the absence of any PSOE politician was notable.

Protestors, that included a number of foreign residents as well as activists from around Malaga province, chanted s “Abolish bullfighting” and “Torture is not Culture”. 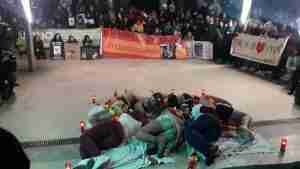 One of the leaders  Gladiators for Peace, Maria Labaig, has read a manifesto in Plaza del Mar, while several protesters, despite the cold, lay nalf naked on sheets stained with blood, symbolising injured bulls during a bullfight.

Labaig stressed that “Two years ago Marbella endedbullfights and the  PP now wants to change this. They want to invest a million euros to kill these poor animals.”

“It is neither art nor culture.”

To loud applause Labaig said “We are more than them and we will make noise. Marbella is an international, exemplary municipality and must be an environment free from animal abuse”.