HBE are seven brothers from the south side of Chicago. They come from an extraordinary musical family – their father is Phil Cohran, founder of Sun Ra Arkestra and Earth Wind & Fire – and HBE has added elements of street smart Hip Hop, funk and afrobeat to traditional New Orleans brass band style.

Together they have toured throughout Europe, Asia, Australia, Africa and South America playing with everyone from Prince, Mos Def , Mick Jones (The Clash) and Damon Albarn (Blur, Gorillaz). 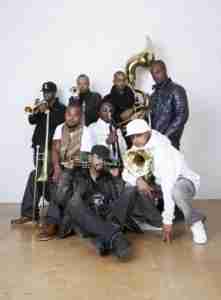 The documentary film Brothers Hypnotic, explored their music, work ethic, life and experience of being raised by their jazz legend father Phil Cohran. After screening in major cities and festivals, it aired on PBS. Their song, War was featured in the blockbuster hit movie, Hunger Games.

On Wednesday, HBE play La Caterina – one of our favourite places –  in the Poligono La Campana for one night only. This is a unique opportunity to see one of the best brass bands touring at the moment – we’ll see you there!

Marbella to go into lockdown as Covid cases soar