Everything you wanted to know about Marbella but were afraid to ask...

“Brownstein! It’s Fish. I’m in a jam session in bar in La Campana and have just been playing with Nader and Adam. We’re thinking of putting the band back together! Be up at Nader’s tonight for practice”

This was the voice message that greeted me as I blearily flicked on the mobile phone at stupid o’clock one morning. I had been standing in on the Breakfast Show as the regular presenter had been away on a cruise, hence the early starts that even surprised the cat, who looked up with a start and wondered what in the name of Odin’s Raven I was doing up at this unmentionable hour.

I took a long, hard, stubble filled look in the mirror. “Every time I think that I get out, they drag me back in” I muttered a la Pacino. 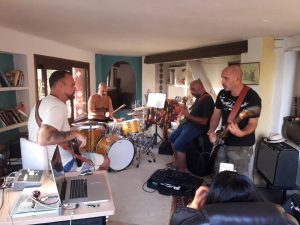 The thought of playing guitar with Fish, Nader and Adam filled me with no little trepidation. Back in the 80s, when we were all big hair, bigger shoulder pads and smoldering attitude, Fish and I had played in a band called Medicine Show, fronted by the larger than life and fabulously named late, great Brenton Macbeth Blackwood. Our chaotic but raucously fun career came to an abrupt end when Brenty, a devotee of The Doors, came over all Jim Morrison on us, drank a bottle of vodka before a major gig, and promptly passed out on stage halfway through the first song. The look of frozen fear that went between Fish on bass and me on lead haunts me still.

Having moved to America, Fish opened for Blue Oyster Cult in Florida as well as playing the Hard Rock Café in Bogota, which must have been quite a gig. Imagine an audience comprised mainly of Shakira and Tony Montana lookalikes and you get the general idea.

Adam comes from a long line of drummers, and I’d gigged with his multi talented brother, and also international photographer, Wayne back in the 80s. Since then Adam had moved back to New York and been in a couple of ‘bubbling under’ East Coast bands. And Nader is, put simply, one of the most amazing guitarists that I’ve ever met, plus being a brilliant friend – the new album is out on Spotify by the way…

And then there’s me. Since the vodka fuelled breakup of Medicine Show, I hadn’t picked up an electric guitar in anger for decades, happy to strum away on a battered acoustic, more comfortable behind the microphone in a radio station than on stage.

But Nader insisted that I come and play, as Fish was only visiting for a few days, so I duly found myself standing nervously in the rehearsal room in Nader’s beautiful house. He picked me out a suitable instrument from his ‘wall of guitars’ – I kid you not, his house is THAT cool – we plugged in, turned the amp up to 11, and off we went.

What followed were the most fabulous couple of hours, playing, catching up, reminiscing on gigs and generally having a great time. I may have been the least gifted musician there, but I probably had the most fun. Afterward we posed for the ‘Official Group Photo’ on Nader’s roof deck and I’m still grinning like a loon.

It may only have been Rock n Roll, but I LOVED it. Benicassim here we come… and we are available for weddings, court hearings etc…