In one of his more memorable quotes, Oscar Wilde once wrote that a man should try everything once in life other than incest and folk dancing. So with that in mind I decided to take the plunge and enrolled for my first ever yoga class.

There were several reasons for me deciding to do this. One is that I’m on a health and fitness kick at the moment. I’m heading towards my 50s with alarming speed, so I need something to keep me in shape. I saw Sting in concert a couple of years ago in concert and he’s a big yoga fanatic . The Police frontman looked incredible at 60 and I reasoned that if it was good enough for the world’s most famous Geordie (Jimmy Nail doesn’t count) it was good enough for me.

Also the studios at Radiant Yoga in Nueva Andalucia are run by friends, so if I was going to make a complete arse of myself, then it was best to do it amongst friends. Actually, that has rung true for several other episodes of my life, as my long suffering amigos will testify.

I duly rocked up on the opening day of the studio and enrolled myself manfully in the ‘Hot Yoga’ class. This takes place in a specially heated studio and is designed to really detox the body and get the blood flowing.

‘Peace of cake’ I thought to myself as I stripped down to my rugby shorts and training top. ‘I train three times a week, so what could possibly go wrong?’ I also noted that I was the only man in the class, and was surrounded by rather lovely, very fit and slightly boho type women. I subconsciously went into George Clooney Nespresso mode… 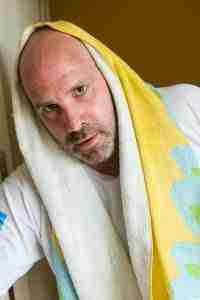 As soon as stepped into the studio, however, I knew that I had made a big, BIG mistake. Instead of a pleasantly warm room, the studio was a sauna. I have a Welsh father and a Scottish mother, which means that my metabolism is 100% Celtic. We’re not used to extreme heat and when we do, we ‘glow’. I was glowing buckets before we even started.

Any ‘nudge nudge, wink wink, only guy in a room full of women with their bums in the air’ ideas were soon blown out of the water. Even more so when just after the 10 minute mark of the class I realised that I put my shorts on back to front. Luckily I had a particularly supportive pair of sports Calvins on, but I still spent the rest of the class worrying about the possibility of ‘fallout’.

Luckily, my time in the class wasn’t to last that much longer.

The instructress Margaret was leading us all through a series of movements, but I was finding it harder to breathe and concentrate, and was now dripping in sweat. I started to get the first warning signs of dizziness, plus the scrambled eggs that I had eaten earlier seemed eager to make a reappearance.

It was either walk out, throw up or pass out. Quite possibly a combination of all three. Although if you were lucky enough to catch me in my Press Lunch Freeloader prime about ten years ago that was a pretty frequent event.

This time, however, discretion got the better part of valour and I staggered out of the studio into the cool of the male changing room, with the other instructors handing me a much needed glass of water.
All agreed that was a complete nutter to try a Hot Yoga class, but thought that I had put in a superb effort. The next day I could really feel that the session had worked my abs, so I plan to work yoga into my fitness programme.

Hot Yoga classes take place at Radiant Yoga (next to Mercadona Los Naranjos, every Saturday at 9am. See their Facebook page for details)

UK GOVERNMENT WRITES TO MORE THAN 100,000 BRITS LIVING IN SPAIN

Gastronomy and Golf on La Concha!