One of  the most unlikely stories to come out of this year’s FITUR  (International Tourism Fair ) in Madrid, was the Press Release claiming that San Pedro was set to be the centre of the fashion world.

That’s right. San Pedro. You know. The building site masquerading as a town that still hasn’t finished the Church Square rennovations, figured out a decent traffic layout or taken the Christmas decorations down yet. That’s bad luck, by the way.

A breathless press release from FITUR stated that “The second edition of the catwalk ‘ San Pedro de Moda ‘, which will take place from July 17 to 21 to turn San Pedro Alcántara into an international capital of fashion and a meeting point between established designers from the eastern countries and young talents from the Costa del Sol.” 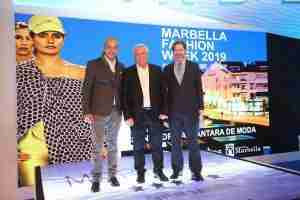 That well known fashion icon, San Pedro deputy mayor, Rafael Piña, general director of Tourism, Luis Cardo, along with Julio Battaglia, organiser of Marbella Fashion Week – whose website reads – “It is time not to be dressed like everyone else!” (naked is new clothed, obviously) – stated that it was their goal ” “to turn San Pedro into the official centre of Marbella Fashion Week and fashion in the world, as we have signed agreements with designers from Eastern countries, which guarantees us a media impact in the written press and televisions of their nations. ”

All four catwalk shows that make up Marbella International Fashion Week will take place on the Boulevard San Pedro “all of them within the New Fashion calendar. York, London and Milan, which makes us a benchmark in fashion” claimed Battaglia.

Having just taken a stroll along the afformentioned Boulevard, where the “look” appears to be hoodies brought from the nearest Chino rather than vintage Chanel, somehow I can’t imagine the movers and shakers of international fashion world decamping en masse to San P…