The legendary Led Zeppelin frontman, 67, proved the old adage that “Old Rockers never die” as he delivered a superb Starlite set that included reworkings of classics such as “Rock n Roll”, “Ramble On” and “Whole Lotta Love”. 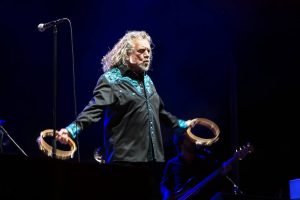 And while the voice might not be able to hit the high notes of his 70s pomp, Plant used his range intelligently, reworking the vocals when needed, stripping other songs back to basics and letting his superb band, The Sensational Space Shifters, take over when needed.

The audience was a unusual mix of old rockers, Marbella types and Madrileños, who you suspect had never really heard of Led Zep and didn’t give the genuine Rock God the respect He felt he deserved. A “most annoying award” must go to the pijo couple who talked loudly to each other behind me (until I gave them my best Death Stare) and they scurried off to the hospitality area.

Plant himself, resplendent in a black and jade cowboy shirt, also remarked on the manners of some of the audience telling one member of the audience to put his iPhone down, as well as remarking there must be some very weak bladders out there, what with all the walking around in front of the stage.

Plants’s show finished on a high, with an encore with numbers including “Babe I’m going to leave you” and “Going to California” that left the audience on their feet and shouting for more.

A brilliant show that set the bar high for other acts at Starlite to follow. Santana on July 24 should be quite something…

Will easing of travel restrictions mark surge in second homes?

Walkies! Virtual dog walk to be held for charity