Sunday Mutterings – the Look of Lux

The Goddaughter was back again this month, to spend some time out and catch up before her wedding in Glastonbury in August. And as always when Ziggy arrives at the Casita, it was an action packed week.

This time she invited her best friend and maid-of-honour at the forthcoming nuptials, Lux, along. Like Ziggy, Lux is a modern circus performer and the pair does a routine involving fire. They are also planning to do something involving flaming staves at the ceremony itself and, as I’m going to be the celebrant, it’s fair to say this won’t be your conventional wedding.

The drama started before Ziggy had even landed in Spain. Flying with a head cold, she wasn’t able to adjust the pressure as the plane descended. As well as being incredibly painful and more than a little frightening, it also meant that her ears started bleeding and she went deaf. This was the cue for Ryanair signaling a full scale medical emergency, complete with paramedics running onto the plane on the tarmac, lots of shouting in Spanish (which she doesn’t speak and couldn’t hear) at the bewildered Ziggy, throwing her into an ambulance and dashing to the medical centre (complete with more shouting) where they stuck a needle in her. Deaf, in pain and with a fear of all medical institutions, they then dumped a completely traumatised Ziggy back in arrivals. Which is where I found her…

After giving her a huge hug and grabbing extortionately expensive water at the arrivals bar, I told Ziggy to sit tight while I went to find Lux, who was coming in on a later flight. “But you’ve never met her. How will you know her?” the Goddaughter asked. ”Ziglet, she’s you bestie. I’m sure she will stand out in the crowd” I replied. 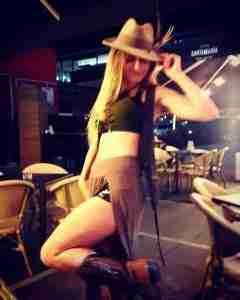 That was the understatement of the year. As the rest of the Luton flight, all hen parties and shell suits shuffled past with that bewildered look that the majority have when arriving at Malaga, a lone female figure, wearing a hat with a pheasant feather, Game of Thrones style laced top, split skirt and cowboy boots, strode past. “You must be Lux” I grinned.

The rest of the week was hectic and included organising photo shoots, visiting my other Goddaughter up in Coin, and coining the term ‘Godsisters’, the drama of the right front steering arm breaking of the Landcruiser while thundering down the Istan road (a ‘life flashing before my eyes experience’. Although I did enjoy revisiting certain parts) and, after the social media furore that accompanied her last visit, christening Ziggy with a new nickname – ‘Trollbait’!

The highlight of the trip came from Lux, though. Winding down on the terrace overlooking the lake on the last night, the girls were discussing the fact that mosquitos had bitten them and that the little pests were attracted by pheromones. I mentioned that I had no bites.

“Basically, one of the things that attract mosquitos is if you are sexually active” she said, looking straight at me.

Sunday Morning Mutterings – A message for you, rudies

Marbella Arena back ‘stronger than ever’ in 2021