Walking in a Wedding Wonderland

Thus it came to pass that the Ziglet’s Big Day finally arrived.

My Goddaughter Ziggy married Josh in August, and as “el padrino” I was invited to attend both the civil service at Chelsea and Westminster Registry Office and a celebration lunch near Glastonbury the following weekend.

If you haven’t been following my witterings over the past few months, Ziggy is a burlesque and modern circus performer based in the West Country, who comes to Spain to visit her ‘moral and spiritual guardian’ on a regular basis. Ziggy also comes from a long line of famed London beauties. Her late mother Tiffany was a designer, model and actress (as well as my best friend, hence the Godfather tag), while her grandmother Sara has painted royalty and celebrity and appeared in the West End, as did her aunt Carole, who was also at the wedding.

With a propensity to cry at movies, sports events and even certain songs when they come on the radio, I had a very stern word with myself not to blub at the ceremony. All that went out of the window in seconds when the doors opened and Ziggy walked in on the arm of her proud father Tim, both in tears. She looked amazing and I instantly turned into a happily sobbing wreck.

The rest of the day, including lunch at the Royal Garden Hotel in Kensington, was wonderful. All the speeches were superb and I managed not to cry during mine. Maid of honour Lux – you may remember her from a previous blog Sunday Mutterings &#8211; the Look of Lux  couldn’t but help but notice that I still had no mosquito bites by the way.

Once recovered from the festivities, the wedding party headed to Glastonbury for the second part of the ceremony. 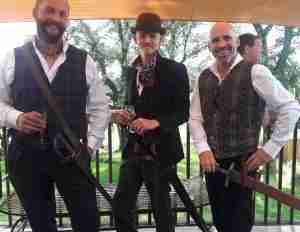 Held in a beautiful farmhouse in Somerset, ‘Wedding 2’ was always going to be different. Tom, the best man, is a sword smith by trade. An imposing figure with a long braid, he looks like he has just stepped out of Winterfell, and he smiled, handing me a sword as I arrived. Not a replica, but an authentic item that could do serious damage if handled incorrectly. I said a quiet prayer of thanks that I no longer drink.

I also discovered that walking around a packed room with a sword takes practice, sitting down is tricky and going to the bathroom could have serious repercussions for your family lineage if you get your timing wrong.

Ziggy and Josh had asked me to act as celebrant in a ‘hand-binding’ ceremony, which I managed to do, again without blubbing during my speech. Even when they walked through a guard of honour of swords -and a broom. We had run out of weaponry at that point and had to improvise!

After lunch the happy couple’s friends began to arrive for the evening celebrations. It was very much a gathering of the tribes, as various, ahem, bohemians, arrived in a variety of outfits. I saw gypsies, star children, woodland folk, pirates and, most impressively, a quartet of Vikings with war paint, furs and serious boots, quaffing from horns of mead.

But I always know when it is time to leave a party. In this instance, it was when one of the female Viking warriors took an arrow from her quiver, lit it and, with a single shot, fired into the bonfire that blazed into life!

It was a wonderful week for a wonderful couple. Ziggy and Josh, I wish you nothing but happiness on your journey together!

Marbella Arena back ‘stronger than ever’ in 2021