We are the Champions!

Trocadero Marbella Rugby Club were crowned champions of Andalucia for the first time with an emphatic 24-10 victory over CR San Jeronimo of Seville on Sunday.

The final took place at the neutral venue of  Puerto Santa Maria, rather than the Olympic Stadium in Seville. The Andalucian Rugby Federation (F.A.R) might have thought that the venue would be neutral, but they obviously didn’t expect the specially chartered bus and fleet of cars that brought a large Marbella contingent to the stands!

This was the first ever final that Trocadero Rugby Club had competed in and the more experienced San Jeronimo were expected to have a slight advantage, but it was Marbella who were first to strike with a try on 20 minutes by under 19 player Augusto Núñez. Two penalties by Andrés “Lana” Costa put the team up 11-0, but San Jeronimo responded with a converted try to make the score 11-7.

Marbella continued to dominate with a superb drop goal by captain Kike González and a converted try by Rodrigo Stüven that meant they went in at half time with a 21-7 lead.

The first ten minutes of the second half saw both sides kick successful penalties, and that was it in terms of the score. It wasn’t the end of the action, however, and the last 30 minutes of the match saw scrappy and “exhuberent”  play by both sides that resulted in two yellow cards (one for each side) and three straight reds (two for San Jeronino, one for Marbella). 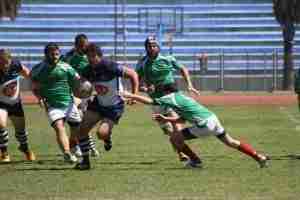 The final whistle was marked with huge celebrations by Trocadero Marbella Rugby Club, who dedicated the victory to player Javier García de la Peña, who was injured in the semifinal and unable to play.

As Champions of Andalucia, Trocadero Marbella Rugby Club now go into the playoffs for a place in Spain’s national Division de Honor B, and will be a side to be treated with respect.

Trocadero Marbella Rugby Club have pulled off one of the greatest acheivements of and Marbella sporting side, and if they are not named Team of the Year at the Marbella Sports Awards at the end of 2016, I will be eating a rather large hat!